I have all of this information posted under one of the photos on Flickr and always send people to that photo who become terrified when they see a close-up shot of one of these that I have posted!! Please read and I hope the information will ease a few of your fears!!

I am going to try to wrap everything up in one narrative here to attempt one final time to put everyone’s fears to rest about ALLIGATORS!!! The first thing that I want to say is that they are NOT Crocodiles and in no way are they as aggressive as crocodiles! Are they dangerous…you bet your booties! Are they lurking in the water just waiting for some unsuspecting soul to come along so that they can jump out of the water and eat them…I think NOT!! If that were the case then the thousands of people who paddle and go boating would be in mortal danger throughout the southern states and that has just not been the case! I am writing this so that I can refer people to this particular post in the future and not have to rehash things over and over! I hope I succeed! 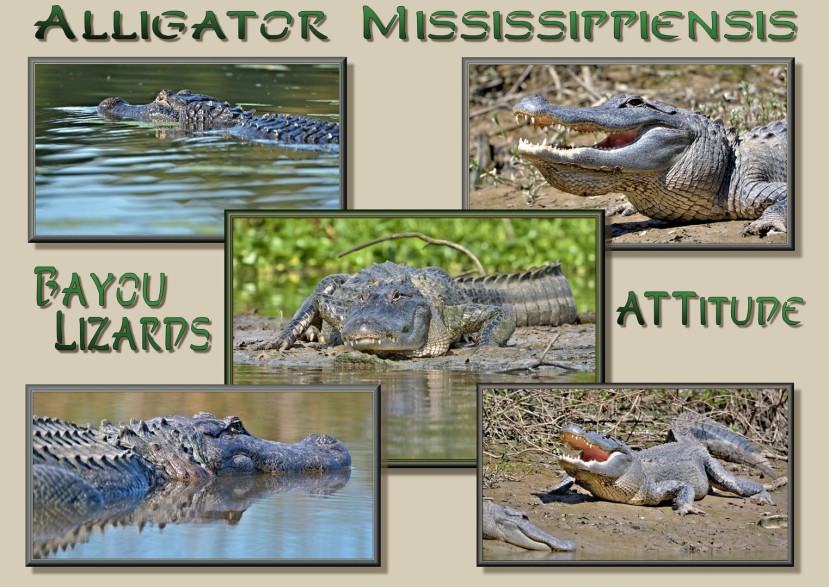 There have been 24 fatalities total in the whole United States since they began keeping records! 23 of those fatalities have occurred in Florida while only Georgia has had a fatality! No other state including Texas has ever recorded a fatality (See footnote 1)! I in no way feel threatened while I am canoeing and taking photos! If I ever felt that they were the Big Bad ALLIGATOR then I would most definitely quit paddling and find something else to take photos of! I have had a couple of smaller 7 to 8 foot alligators swim toward me and challenge me to a part of the bayou but those few have been females with nests and they will issue a challenge to you by floating very high in the water! Once you back away from the nest they are completely satisfied and go back to lying low in the water and guarding the nest! It is purely maternal instincts at work!

Another dangerous part of the year is during mating season when the males become extremely territorial and especially if they are courting a female! I have never had one come after me and they will let you know that you are entering their territory by floating very high in the water and trying to look as large as possible! I hear people talk about alligators running into their canoes or kayaks and trying to turn them over! I think it's pure bunk as I probably spend more time on the bayou than anyone except my buddy Gary! We continue to paddle the bayou on a regular basis and still have all of our limbs attached securely to our body!

People that see alligators tend to EXAGGERATE their size and that’s capitalized for a reason because they do tend to add to the length just to impress people! Gary and I estimate that the largest alligator on the bayou is 13’ in length and I will tell you that whenever you see a 13’ alligator you will definitely remember it because it is huge! When they get over 10’ they are very impressive and something to be respected! There are maybe 8 to 10 alligators on the bayou system that are in the 11 to 13 foot ranges and you well know it when you see them as well!

I just want to add that I have been paddling the bayous now for about 26 years and over a period of a year I probably average at least one trip a week if not more! That comes to over 1,300 trips on the bayou! That means that I have paddled past, around and by each and every gator out there about 1,300 times without incident! I’m going to leave out the little alligators and only focus on the larger ones and say that there are probably ten alligators in the bayou that could definitely ruin your day if they were so inclined! That would mean that I have paddled past over 13,000 alligators in my time on the bayou! You would think that there would have been at least ONE incident, but that has not been the case!

I’m not the only paddler out there and I just know that they are no threat even when you sink your canoe doing a stupid thing as I did in one instance! There are at least three alligators over 10 feet in that area where I managed to go for an unintentional swim and we managed to flounder around in the water for roughly 20 minutes before I could get the canoe up righted and us back inside and floating on the water! Very unnerving but yet we were not attacked or harmed in any way!

You always have to respect their size and not paddle close to the bank because that is a sure fire way to get run over by a behemoth if he tries to get into the water quickly! If you are between him and the water you will get squashed as he makes his way right over around and through you! When you find them lying on the bank and they allow you to come in for a close shot never and I repeat NEVER block their route to the water and ALWAYS leave them an exit path! Just because they slide into the water doesn’t mean that they are coming to rip the bottom out of your canoe and take an arm and a leg! Just be sensible! They are merely trying to get away because believe it or not they are scared of humans! I am not brave and I hope that I am not stupid and will continue to try to photograph them in their environment to the best of my ability while trying to be safe! Just remember that you are in MUCH greater danger driving down the road in your car than I am photographing the alligators!

I hope that this puts all of your fears and concerns to rest! I might also add that I take my grandkids out canoeing and would never put them our anyone else in danger! Rest easy and I’ll try to keep you up to date on our local lumpy lizard population!

Since I posted this narrative initially a death in the state of Texas has occurred and it happened on July 3, 2015 in Orange Texas! There was a news report on that attack but I did not include those details in this narrative!

Also want to add a bit of insight here before I continue!! Don't come to me and say you've seen an 18 foot alligator basking on the banks of the Horsepen Bayou!!!  There are absolute no alligators on the bayou that are that large! The U.S. record is 15 feet and the alligator was caught in Alabama! The alligator pictured below is somewhere in the 13 foot range and when you see him you'll know that he is the SUPREME master of the bayou in our area! I have not measured him but am willing to provide the tape measure if you want to give it a try! A friend of mine who paddles the bayou as often as I do estimated his length at 13 feet and I agree with him!! Give or take a few inches but not feet!! 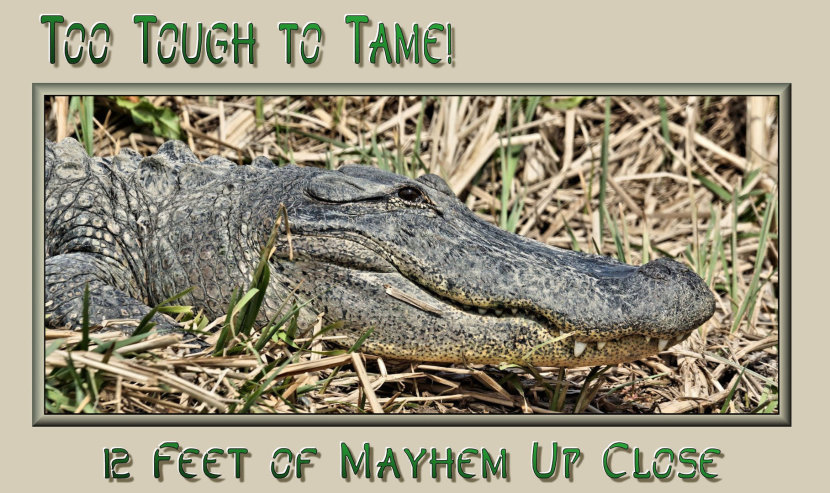 It's really sad that someone lost their life but being the dim bulb in the bunch will usually get a person into trouble! You wouldn't crawl over the wall at the zoo into the lion enclosure just before feeding time and expect nothing to happen! You wouldn't go play in the middle of the freeway during rush hour and you don't go swimming in a bayou at night where a 12 foot long predator has been spotted AND where NO SWIMMING signs are posted! Alligators hunt at night and being foolish WILL get you into trouble!  I want to reiterate that I DO NOT swim with them and that I go canoeing! Two different things! I will continue to treat them with respect and admire their strength and ability to adapt to their environment!  Stay safe...YOU BET!!!!

Note 2 - This was the second death that happened since I wrote this narrative.

I might add that I was very reluctant to post a shot because of what happened in Florida at that Disney resort and I feel so very sorry for the family!!! Alligators can become extremely dangerous and that happens when people get too close to them and begin feeding them!! They then lose their fear of man and see humans as only a food source and nothing else!! When man interferes with the natural order of things it usually doesn't work out well!!!  When fed, alligators become very dangerous and aggressive when it comes to food!!!  A person had better be in tune with what the alligator is telling them by its body language and always give them their space when they demand it!!!

I find myself adding to the narrative once again because someone has been lost to the powerful jaws of these reptiles. It’s a tragic story that could have and should have been avoided by someone who didn’t have enough sense to recognize danger when they come face to face with it. I don’t want to call it an attack since it was more of a walk right up and offer yourself as a food source to the alligator. The woman seemed determined to touch the alligator when it decided that someone had just arrived that wished to be the next meal for this apex predator. She was warned numerous times to back away but would not listen to common sense. So, is it the alligator’s fault? The blame from this observer goes to the human and it’s just sad that both had to lose in this encounter. This attack occurred in Kiawah Island, SC on May 1, 2020.

I am going to add another bit of narrative to this section and hope it doesn't get too lengthy!  Alligators do talk to you if you know how to read their body language!  I included a couple of captures to illustrate my point! If an alligator is swimming leisurely in the water he is very relaxed and usually riding low in the water! I have had 7 to 8 footers pass with 3 or 4 feet of the canoe and just swim right by...quite exciting!!  When you see a arched back and their head held high above the water this is a territorial display and you had better respect that territory  or have one LARGE boat that they can't bite through!!  Floating very high in the water is yet another method that they use to get their point across just as the alligator in the lower right of the illustration was doing! This huge fellow definitely got  his point across and it was the very first time that I turned around and headed back in the other direction!!  Best not to press you luck canoe boy!! You can live longer that way!